Apache Cordova team announced official support for Windows Phone 8.1 platform in version 3.6.3. Is it end of the agony for developers wanting to port their hybrid applications to Microsoft phone platform? Let’s find out.

Because of the support for some thing called ‘Universal App’, which means you can develop the app once and run it on Windows 8, Windows 8.1 and Windows Phone 8.1.

If you look at the created solution, there are a few projects targeting different platforms and the common codebase. 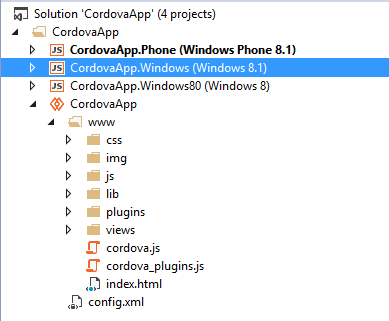 First thought - “Great I will have Windows desktop app also with just a little effort”. Let’s run the app on the emulator (be aware of special switches between target platforms –phone –win)

And… It is not working :(. App crashes, I did not know what happened.

Running application from Visual Studio will show us what actually happens

0x800c001c - JavaScript runtime error: Unable to add dynamic content. A script attempted to inject dynamic content, or elements previously modified dynamically, that might be unsafe. For example, using the innerHTML property to add script or malformed HTML will generate this exception. Use the htoStaticHTML method to filter dynamic content, or explicitly create elements and attributes with a method such as createElement. For more information, see http://go.microsoft.com/fwlink/?LinkID=247104.

What!? Following the link from the error message will tell you more about automatic script filtering, manipulating DOM in ‘secure way’, and much more. That means jquery - doesn’t work, angularjs - doesn’t work, ionic - doesn’t work, your code - probably doesn’t work. You have to change all ‘insecure’ parts of all libraries’ code due to get them to work. There are many more restrictions on developing WinJS applications, and right now if you want to create an app this way you will have to follow Microsoft rules. So I gave up for now, and I am looking forward to better days using Universal App.

[UPDATED: 2014-10-07] There is a small javascript shim library named winstore-jscompat created by MSOpenTech team. It is a nice workaround to injecting dynamic content restriction issue, but I still have problems with the Ionic library.

Another approach, which I prefer, and it is working for my Ionic application is using old wp8 platform.

That’s it! Now you can run emulator from Visual Studio and everything works. It might not look like the same as on other devices you have to adapt it to IE11 :/.